A Theological Response to Squawkin’ Dawkins’ Delusional Twittering about “christianity”

The belief that a cosmic Jewish Zombie who was his own father can make you live forever if you symbolically eat his flesh and telepathically tell him you accept him as your master, so he can remove an evil force from your soul that is present in humanity because a rib woman was convinced by a talking snake to eat from a magical tree . . .  yeah, makes perfect sense.

While living as the Jewish human YAHshua, in fulfillment of many “ancient” prophecies in Hebrew scripture about the “Son of Man”, he said his Father, in Heaven, is “the only true GOD”.

17:1 These words spoke Jesus, and lifted up his eyes to Heaven, and said, Father, the hour has come. Glorify your Son, that your Son also may glorify you.

17:3 And this is life eternal, that they might know you the only true GOD, and Jesus Christ, whom you have sent.

2:6 Who gave himself a ransom for all, to be testified in due time.

The very limited and judgmental Angel (or representative) of the LORD became the “God of Israel”. From his “beginning” he “was God” in the form of a singular personality; but no limited singular personality can begin to represent GOD the Unlimited. Even if all of the countless diverse, fully complete species ever designed by GOD the Unlimited could be seen collectively, they would not adequately portray all of the potential forms of appearance, and instinct-driven behaviors that GOD can choose from to reveal His love of diversity and progressive change.

1:2 The same was in the beginning with GOD.

1:3 All things were made by him [acting as final judge of what was being produced by the only true Creator—GOD the Unlimited]; and without him [the Angel of the LORD GOD] was not any thing made that was made.

Though the Angel of the LORD had been authorized to represent the “only true GOD” as “God”—(“the Logos was God”), after he became the supernaturally begotten “Son of GOD” to fulfil all mortal “Son of Man” prophecies, he never claimed to be God again, either during his human life which ended in 30 A.D., or after his resurrection and return to his former Spirit existence. He calls the only true GOD “my God”.

3:3 Jesus answered and said unto him, Truly, truly, I say unto you, Except a man be born again, he cannot see the Kingdom of GOD [the future Government of GOD on Earth].

3:4 Nicodemus says unto him, How can a man be born when he is old? Can he enter the second time into his mother's womb, and be born?

3:5 Jesus answered, Truly, truly, I say unto you, Except a man be born of water [referring to the amniotic fluid, or “breaking of waters” signaling impending physical birth] and of the Spirit, he cannot enter into the Kingdom of GOD.

3:7 Marvel not that I said unto you, You must be born again.

3:8 The wind blows where it decides, and you hear the sound thereof, but can not tell from where it comes, and where it goes. So is every one that is born of the Spirit [“born again”].

The intake of “religious communion wafers” as a symbol of “flesh” has no affect whatever on the determination of one’s final state of existence, which will be either eternal life, or oblivion.

6:13 I give you charge in the sight of GOD, who replenishes life to all things, and before Christ Jesus, who before Pontius Pilate witnessed a good confession;

6:14 That you keep this commandment without spot, blameless, until the appearing of our Lord Jesus Christ;

6:15 Which in His [GOD’s] times He shall show who is the blessed and only Potentate, the King of kings, and Lord of lords;

6:16 Who only, has immortality [GOD the Father], dwelling in the light which no man can approach unto; whom no man has seen, nor can see; to whom be honor and power everlasting. Amen.

6:63 It is the Spirit that gives life; the [literal] flesh [of his mortal body—or anything symbolizing it] profits nothing [in fact he later attempted to convince the Father to scrap the whole “sacrificial lamb” fulfillment, which revealed that he didn’t think it was a necessary element in anyone’s salvation]. The words that I speak unto you, they are spirit [spiritual—not literal], and they are life [giving].

8:11 But if the Spirit of Him [GOD] that raised up Jesus from the dead dwell in you, He that raised up Christ from the dead shall also restore life in your mortal bodies by His Spirit that dwells in you [it won’t make any difference how many thousands of “communion wafers” you ate during Mass rituals—”It is the Spirit that gives life; the flesh profits nothing.” John 6:63].

No one needs to pray to YAHshua—and especially not to his mother Mary. She’s physically dead, “asleep in the spirit”, unconscious, and awaiting the “first resurrection”. YAHshua said pray to GOD the Father, privately, who utilizes His literally “universal” Spirt to automatically monitor and record any “judgeable” behavior by every human in an automated non-judging process which accesses what scripture calls “the spirit in man”.

32:6 And Elihu the son of Barachel the Buzite answered and said, I am young, and you are very old; wherefore I was afraid, and dared not show you my opinion.

32:7 I said, Days should speak, and multitude of years should teach wisdom.

32:8 But there is a spirit in man: and the inspiration of the Almighty gives them understanding.

32:9 Great men are not always wise; neither do the aged understand judgment.

2:9 But as it is written, Eye has not seen, nor ear heard, neither have entered into the heart of man, the things which GOD has prepared for them that love Him.

2:10 But GOD has revealed them unto us by His Spirit; for the Spirit [of GOD] searches all things. Yes, the deep things of GOD.

2:11 For what man knows the things of a man, save [by] the spirit of man which is in him? Even so, the things of GOD knows no man, but by the Spirit of GOD.

The “spirit in man”, which is provided by GOD’s Spirit at birth, is a custom-designed “personality matrix”, generated automatically by GOD’s Spirit, that causes each human to act the way he or she looks—throughout all stages of his or her life. In humans it can be modified and affected by a person’s life experiences, but normally every person will usually act the way they look, if they are not forced into artificial conformity and uniformity by a strict religious or military environment.

All non-human species with brains, and many without, acquire their “pre-learned” instinctive behaviorisms from the spirit component added to their physical brains, if they have one, which causes them to act in a manner congruous with their external appearances and physiological capabilities. Individuals of every non-human specie depend on their “programmed, pre-learned” instincts to enable them to act the way they need to in order to mature and reproduce a subsequent generation essentially identical to themselves.

No human begins life with an “evil force in its soul” as mockingly stated by Dawkins. That’s absurd—yet countless religionists believe it. We do begin life with no control of our emotions, behavior, and eliminatory functions. We have absolutely no concern about others—and loudly demand that someone else make us feel better—NOW! We instinctively acted like babies because we were designed to exhibit to adults most of the behaviors that are completely unacceptable in human society and have to be controlled in order to be considered “mature”.

Some never become psychologically mature no matter how “old” they get. But immaturity is not a sin unless it leads to the endangerment or injury of others. For instance, government “rulers” starting unnecessary wars. I consider war-mongering—the “selling” of war, and weaponry—to be one of the worst sins. The unnecessary killing of animals and other creatures for “sport” is also repugnant.

No one will ever be condemned to the swift, punishing, supernatural execution which will lead to spirit oblivion for some because of a so-called “original sin” committed by Adam or Eve. The only humans in the history of humanity who have probably lost their opportunity for acquiring eternal life, are the few who literally saw and heard YAHshua during his two and a half year ministry, and hated him with intent to murder him.

15:22 If I had not come and spoken unto them, they had not had sin; but now they have no cloak for their sin.

15:24 If I had not done among them the works which no other man did, they had not had sin; but now have they both seen and hated both me and my Father.

15:25 But this comes to pass, that the word might be fulfilled that is written in their Law, They hated me without a cause.

3:28 Truly I say unto you, All sins shall be forgiven unto the sons of men, and blasphemies wherewith whatsoever they shall blaspheme.

3:29 But he that shall blaspheme against the Holy Spirit [GOD’s mind] never has forgiveness, but is in danger of eternal damnation. [If one repents, then the sin that was unpardonable without repentance can be forgiven.]

The so-called “unpardonable sin” can only be committed if a person who has been resurrected for his Last Judgment completely rejects the offer of salvation while being judged face-to-face by YAHshua the Messiah during a period of private, personalized education and examination designed to fully reveal “the knowledge of the truth” that is required for salvation. That knowledge can be easily presented, and will be, to every human who has ever lived, by YAHshua the Messiah himself.

Just as each of us has experienced incredibly “realistic” environments and emotional interactions with others in our dreams, it is no problem for GOD to provide billions of simultaneous personalized interactions with YAHshua, the Judge, “in the spirit” which will be every bit as fully dimensional and realistic as the “real World” we now live in. As the apostle Paul said about himself;

But until that happens any human efforts to provide “saving knowledge” in this World can be easily rejected when presented as inadequately or inaccurately as most Christian churches present it. The bizarre misconceptions about Christian theology that have been “smeared” all over the World by Christians are reflected in the naïve, stupid, and revolting “Twitterization” of “Christian doctrine” excreted by Dawkins. See above.

2:6 Who gave himself a ransom for all, to be testified in due time. 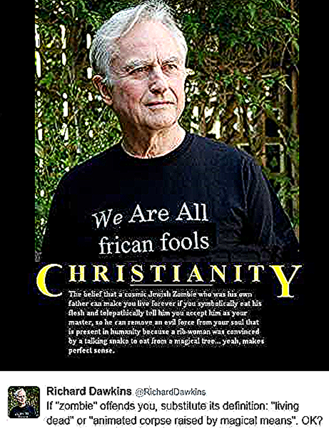 The belief that a cosmic Jewish Zombie who was his own father can make you live forever if you symbolically eat his flesh and telepathically tell him you accept him as your master, so he can remove an evil force from your soul that is present in humanity because a rib woman was convinced by a talking snake to eat from a magical tree . . .  yeah, makes perfect sense.