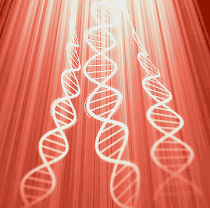 The invisible, and indivisible number of entities in the "Godhead", and their relationship to each other is revealed in the structure of the most abundant and omnipresent atom in the "heavens and the Earth"—and in the human body—Hydrogen—one "positive" proton and one "negative" electron.

1:20 For the invisible things of him, from [the beginning of] the creation of the world are clearly seen, being understood by the things that are made, even his eternal power and Godhead . . .

The Greek alpha-numeric "value" of the "personal" name of the Christ, or Messiah—which is "Iesous" (as it was spelled in the original KJV of the "Bible")—the equivalent of "Yahshua", or Joshua in Hebrew—is 888, which is revealed in the structure of the most abundant atom associated with Earth—the second most abundant atom in the human body—Oxygen—eight protons, eight neutrons, and eight electrons.

Oxygen is the atom most responsible for allowing the existence and continuation of life on Earth, yet it is also responsible for determining the rate of elimination or "utter destruction" of that same life, and also of many non-living entities, sometimes by consuming fire.

The Greek alpha-numeric "total" of χξϛ—which symbolizes the still undisclosed "personal" name of the human who will become the final Anti-Christ—is 666, which is revealed in the structure of the most abundant atom on Earth after the first two—Carbon—six protons, six neutrons, and six electrons. It is the primary visible atomic component of the bodies of all humans—and every other physical life form on Earth—and is typically associated with the death of every life form on Earth.

But beyond that, the ultimate originating Designer and Creator of "all that is made" has "signed, sealed, and delivered"—to every living cell of every human who has ever lived—several encrypted symbolic "messages" which have remained invisible and unable to be "opened" throughout the history of mankind until they began to be made visible and open for interpretation by the revelations of true science—which always debunk the concocted theories of pseudoscientific "mutationism".

6:20 . . .keep that which is committed to your trust, avoiding profane and vain babblings, and oppositions of "science", falsely so called:

Those cryptic or hidden messages identify the Messiah by means of the "signature initial" of his title "Christos" in Greek—Χριστός. But the symbolism extends beyond the general shape of the very familiar signature initial—X.

The symbolism in almost all human chromosomes—except the "male Y" chromosome, which has been "cut off" near the midpoint—includes an important physical trait that is the "key" that identifies who was being designated as the "commander" at the beginning of a 490-year historical period referred to as "seventy weeks" in Chapter 9 of the 2,500 year-old book of Daniel.

That "key" physical trait was also shared by the one being designated as the Messiah—the original "Commander" in the Genesis and Exodus records, who would appear first as a mortal human, publically claiming to be the Messiah at the beginning of the final seven years of that period, and who could be "cut off" as a mortal, "flesh and blood" human near the midpoint.

Incidentally, the predicted events of the last four and a half years of that prophetic period have not yet been fulfilled—except in an "archetypical" manner.

Not only does the literal, non-caricatured shape of virtually every human chromosome become visible in the form of an "X" just before it replicates, or re-creates itself "in its own image"; the physical formation of the "message bearer"—the twisted double-helix of DNA—commonly illustrated as a string of 8’s—once again characterizes the Greek alpha-numeric "value" which symbolizes the "personal" name of the former human, now transformed, who will complete, with the supernatural powers of GOD, the age-lasting responsibilities of the Messiah referred to in the "seventy weeks" prophecy.